A wide range of fantastic Carnivore animals plays an important role in the global ecological equilibrium on Earth. Each carnivore has specific survival skills as well as distinct behavior and eating preferences.

The lynx, one of the most fascinating endangered carnivores, has an intriguing and distinctive feeding pattern and preference. So the current article is on the lynx’s actual favored food?

The lynx inhabits the far reaches of Europe, Asia, and, America’s northern woodlands, and prefers to live and hunt alone. Lynx have thick, gorgeous fur that maintains their body temperature throughout the winter season. Their massive paws are likewise hairy, and when they move or run on snow, their paws serve as natural snow boots for them.

Lynxes occur in a wide range of sizes and forms. Few survive in Europe, but those that do are frequently larger than their North American sibling, the Canada lynx, as well as their Asian siblings.

The lynx is a beautiful and frightening wild big cat that belongs to the Felidae family and is a carnivore. Its prey animals range from small rodents and birds to deer and reindeer in size, depending on the availability of prey, ecological factors, and species. Lynxes come in four different species.

All of these predators are quiet and capable hunters, and they have a favorite food. According to research Hares and white-tailed deer are its favored prey animals in Germany. The lynx’s diet also includes a lot of game birds. The lynx is not a carrion eater in the traditional sense.

Snowshoe hare, deer, caribou, birds, Hares, carrion, and more are among the foods that lynx consume. They are carnivores who are also excellent hunters and they are capable of hunting in the snow environment. Because lynx live in such harsh surroundings, they will consume almost any meat they can find!

The snowshoe hare (Lepus americanus) is their favorite. The lynx is so reliant on this diet that their populations fluctuate with the number of snowshoe hares, which drops every ten years or so. In addition to small animals, Eurasian lynx which are comparatively bigger, hunt deer and other larger prey. These stealthy cats are nocturnal.

The following is a full list of foods that lynx have been known to consume:

Lynx also hunts small carnivores such as the raccoon dog and the fox and can have a significant impact on their populations. Birds make up a higher portion of the lynx’s food in the summer than they do in the winter. The lynx prefers fresh prey and only occasionally eats carrion left by other predators.

Lynx are so fond of snowshoe hares that they eat them in great quantities. Their population fluctuates in tandem with that of the snowshoe hare. If the hare population declines, so does the population of Canadian lynxes.

However, this does not rule out the possibility of them eating a wide variety of other foods. They use their stealth and quiet talents to hunt any little rodent. They aren’t extremely swift creatures, but they do have other options for hunting.

Hunter, (2015) discovered that the primary prey of the Canada lynx is the snowshoe hare in his investigation. These hares make up 35–97% of their food, depending on the season and the number of prey available. When the hare population declines, Canada lynxes eat other animals such as ptarmigan, grouse, ducks, American red squirrels, voles, moles, and juvenile ungulates such as mule deer, Dall’s sheep, and boreal woodland caribou. In their investigation, Mowat et al., (1999) discovered that the Canada lynx is less choosy in the summer and autumn, eating small mammals as a minor component of their diet in addition to the hare. It’s unclear why this is happening; it could be due to a larger abundance of alternative prey or lower hunting success with hares.

According to Palomares et al., (2001) the Iberian lynx feeds mostly on European rabbits, with red-legged partridges, rodents, and wild ungulates forming a lesser part of its diet. Young fallow deer, roe deer, European mouflon, and ducks are among the animals it preys on. They are, however, less adaptable and rely significantly on hares.

Krofel et al., (2011) claim that Eurasian lynx hunt primarily on small to medium-sized mammals and birds. Rabbits, squirrels, hares, dormice, marmots, mustelids, juvenile moose, grouse, wild boar, roe deer, chamois, reindeer, red foxes, red deer, and other ungulates are among the species’ documented prey. The Eurasian lynx is the only lynx species that prefers to eat ungulates, which is in line with its bigger size. While taking on larger prey poses a risk to the animal, the benefits of killing them may exceed the hazards. As a result, the Eurasian lynx prefers large ungulate prey, especially in the winter when small prey is scarce. Roe deer appear to be the lynx’s favorite prey species where they are plentiful.

Nussbaum and Maser (1975) depicted in their studies that the diet composition of bobcats was 52.5-70.6% rabbits, and he revealed that bobcats mainly prey on rodents 70-82.3%, However, he found evidence of 2.1-2.9% deers’ meat during feces analyses of bobcats which may probably be carrion.

Lynx are superb hunters with excellent hearing and eyesight so sharp that a lynx can detect a mouse from a distance of 250 feet, along with another excellent sensory boost for their eyesight.

Nellis and Keith (1968) depicted in their research that the long legs of lynx enable them to travel long distances over snow for extended periods. To obtain prey in the winter, a lynx is reported to travel an average of 3 miles.

They can also jump an average of 6 ± 2 feet to catch their prey when hunting. Nellis and Keith (1968) continue, “Whether or not they jump very far depends on the type of prey they are pursuing.”

The lynx chases its prey, sneaks up on it, and attacks with a fast pouncing assault. The lynx normally begins its meal from the prey’s thighs, and large prey animals have precise bite marks on their necks. Unless it is disturbed, the lynx normally conceals its kill and returns to it.

If the lynx is unable to reach the prey animal’s throat, it may hold the back of its neck in rare situations. The lynx, unlike the wolverine, never bites its prey lower down in the back. The lynx’s claws are sometimes seen on the prey animal’s stomach or sides. On the scene of a lynx kill, signs of a struggle are infrequent.

According to Fuller (2004), lynx can hunt deer species when the opportunity arises. They saw a lynx pursuing a deer in deep snow, and the deer was hampered by the massive snowbanks.

Given its enormous snowshoe-like feet, the lynx has no issue navigating severe winter conditions. They took advantage of the ailing deer and hunted it down with ease, implying that they may dine on many more mammals that are unable to cope with the snow.

The lynx normally begins eating its prey’s thighs and shoulders, leaving the head and top section of the neck, as well as the lungs and stomach, unaffected. The lynx does not normally store its kill; however, it may partially cover it for a short period. If disturbed, a lynx may abandon its prey almost unharmed, however, there are significant differences between individuals in this regard. According to studies, a lynx eats all edible components of its victim, however, due to the nature of its teeth and skull; it cannot shatter bones like other large carnivores.

The amount of food consumed by a lynx is determined based on the season and the availability of food. Some lynx, for example, have been recorded devouring an entire snowshoe hare in one sitting, while others have been recorded saving their prey for later consumption.

Every day, Canadian lynxes consume 0.6–1.2 kilogram (1.3–2.6 lb) of food. Adult Eurasian lynx, on the other hand, require 1.1 to 2 kilograms (2.4 to 4.4 lb) of meat each day, and some of their larger prey can take several days to consume. A male Iberian lynx needs one rabbit per day, while a female Iberian lynx with kittens needs three rabbits each day.

Given how much the snowshoe hare population affects lynx populations, it’s secure to anticipate that a lynx devour more hares than we know the population can handle. The winter seasons may also have an impact on their dietary patterns.

Lynxes feed their young and share food with them. Sunde et al., (2000) discovered that mother lynx with cubs are 80 percent more likely than adult male lynx to share a deer carcass with their offspring. Overall, adult males are less likely to consume carcasses; instead, they prefer to eat their own kill.

Read Also : What do Cougars Eat

In the winter, lynx eat the same foods as in the summer, albeit their prey may be scarcer. Snowshoe hares, on the other hand, are adapted to live in cold climates, which may explain why they are such a desirable food source for lynx.

As previously noted, lynx populations are inextricably linked to snowshoe hare populations. The dread and worry of a prey snowshoe hare can be absorbed by lynx when they eat it, and their cortisol or stress hormone levels surged during peak hunting seasons (Majchrzak, 2016).

Many experts were startled since they expected lynx cortisol levels to be highest near the end of the season when food is scarce and a lynx may be more anxious about having a nice meal.

However, this was not the case; their stress levels remained at their highest during peak hunting season when hares were plentiful. This could indicate that prey animals are affected by stress and that stress is absorbed by lynxes as well.

Lynx, like other predators, secure their place as secondary and tertiary consumers in ecology, but scientists believe that due to their high consumption rate of rodents such as mice, squirrels, Rabbits and hear they may play an essential role in slowing the rate of natural forest degradation. They also appear to be important competitors of other small carnivores. Sunquist and Sunquist (2017) discovered that when hare populations were low, lynxes played a role in the decline of red fox, caribou, and Dall’s sheep populations.

Lynx tend to leave people alone, but if trapped or threatened, they can be hazardous to humans. Given their enormous claws and predatory nature, lynx, like all big cats, can cause injury.

Early spring or late winter is the best time for lynx to mate. The litter size of lynx varies from one to four pubs and their gestation period is about two months.

The Iberian lynx is a wild cat species native to the Iberian Peninsula in southwestern Europe. It is classified as Endangered by the International Union for Conservation of Nature (IUCN) (2015). While Canadian Lynx and Bobcats are classed as being of least concern, their populations are rapidly declining (IUCN, Red List 2015).

Lynx are occasionally hunted by humans for their magnificent fur. The Iberian lynx is an endangered species that lives in the Spanish mountains, far from the chilly northern woodlands where most lynx inhabit. Habitat fragmentation, poaching, and deforestation are serious threats to the declining population of these endangered carnivores.

As a wildlife expert, I have a few recommendations for lynx protection. 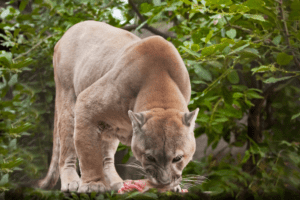 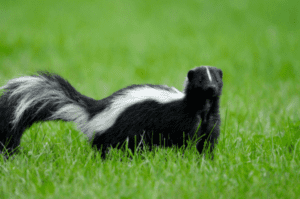 What Do Skunks Eat? A Detailed Look at the Diet of These Fascinating Creatures